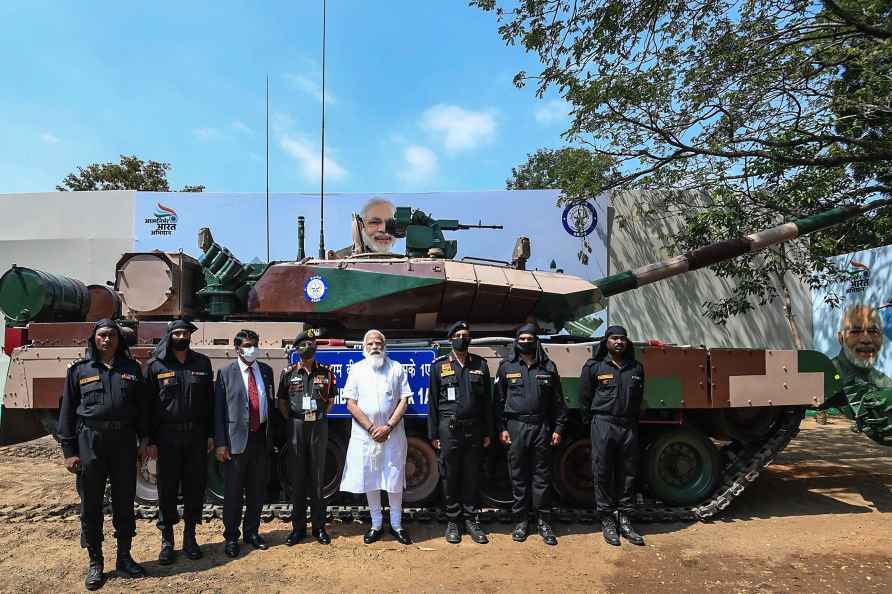 [**EDS: TWITTER IMAGE POSTED BY @narendramodi ON SUNDAY, FEB. 14, 2021** Chennai: Prime Minister Narendra Modi while handing over the indigenously developed Arjun Main Battle Tank (Mark 1A) tanks to the army, in Chennai. ( /PTI] Chennai, Feb 14 : Prime Minister Narendra Modi on Sunday afternoon caught a fleeting view of the "interesting" second Test between India and England being played at the MA Chidambaram Stadium here. "Caught a fleeting view of an interesting test match in Chennai," Modi posted on his official Twitter handle with a beautiful image of the 'Chepauk' Stadium captured from his airplane. The tweet was then re-tweeted by the official handle of BCCI. Virat Kohli's men, who lost the first Test by a massive margin of 227 runs, are in a commanding position in the ongoing Test match as they had England reeling at 106/8 at the tea break on Day Two. India had posted 329 runs in their first innings. The Prime Minister arrived in the Tamil Nadu capital earlier on Sunday morning and handed over the indigenously developed Arjun Main Battle Tank (Mark 1A) tanks to Army Chief General M.M. Naravane. He later proceeded to the Jawaharlal Nehru Indoor stadium to launch several projects in the poll bound state. He inaugurated the Chennai Metro Rail Phase-I extension, completed at a cost of Rs 3,770 crores. Modi also inaugurated 22 km long fourth Railway line between Chennai Beach and Attipattu and also laid the foundation stone for the Discovery Campus of IIT Madras. India and England are currently taking part in a four-Test series, the first two of which are being played in Chennai while the remaining two matches will be played at the Sardar Patel Stadium in Ahmedabad. /IANS

Meghalaya parties resume stir to keep state out of CAA purview
[Geneva : Members of the Ethiopian Tigray community in Switzerland protest against the Ethiopian government for what they call a civil war in Tigray a

What's up with Tisca Chopra?
[Kingstown : British, Canadian and U.S. nationals line up alongside the Royal Caribbean cruise ship Reflection to be evacuated free of charge, in King

New Delhi, April 16 : Apple is all set for its first event of the year on April 20 and media reports suggest that new iPads with 5G support and Apple TV upgrades along with a deep dive into iOS 14.5 a […]

Washington, April 16 : US space agency NASA is set to launch SpaceX Crew Dragon second flight to the International Space Station on April 22, it said. The Crew-2 with four astronauts on board, w […]

New Delhi, April 16 : At a time when an outbreak of coronavirus has forced the school students to stay at home and continue their studies online, children of labourers and daily wage workers have no c […]

Lisbon, April 16 : Portugal announced its intention to withdraw its troops deployed in Afghanistan under the command of the North Atlantic Treaty Organization (NATO) as of May 1. "With this with […]